The small Luberon and Vaucluse mountains

Halfway between the Alps and the Mediterranean, the Luberon stretches from east to west its rock barrier which rises to 1125 m; separated by a fertile valley, the Vaucluse mountains face it to the north.

Beyond the most famous villages, many less visited sites are not to be missed.

Starting from le clos des Sorgues, a loop route will traverse the Vaucluse mountains to return back through the slopes of the Luberon on the other side of the valley.

After crossing Le Thor, pleasantly situated on the river Sorgue, dominated by the hill of Thouzon, we will join Isle-sur-la-Sorgue and Fontaine-de-Vaucluse 8 km away.

Located at the foot of a rocky circus with impressive walls, the resurgence is one of the most powerful in the world, but its 630 million m3 annually make it the first of Europe; This well is the resurgence of a huge underground network covering 1240 km2. It collects rainwater from Mont Ventoux mountain, the Vaucluse mountains and the Lure mountain and here emerges from a depth of over 300 m at a constant temperature of 13 ° C; flow very rarely reached 100 m3 / s, and usually flows between 30 m3 and 4 m3 per second in summer.

From the village, we follow the path that borders the emerald green river to the resurgence: watching the river shaded by plane will avoid seeing the many unsightly shops that line the 10 minute journey. The paper mill, the last survivor of the four existing mills in the 18th century enables to view an old process of papermaking and offers in the shop beautiful papers and texts.

A visit on Sunday is not to be preferred because the Fontaine-deVaucluse site is so popular. 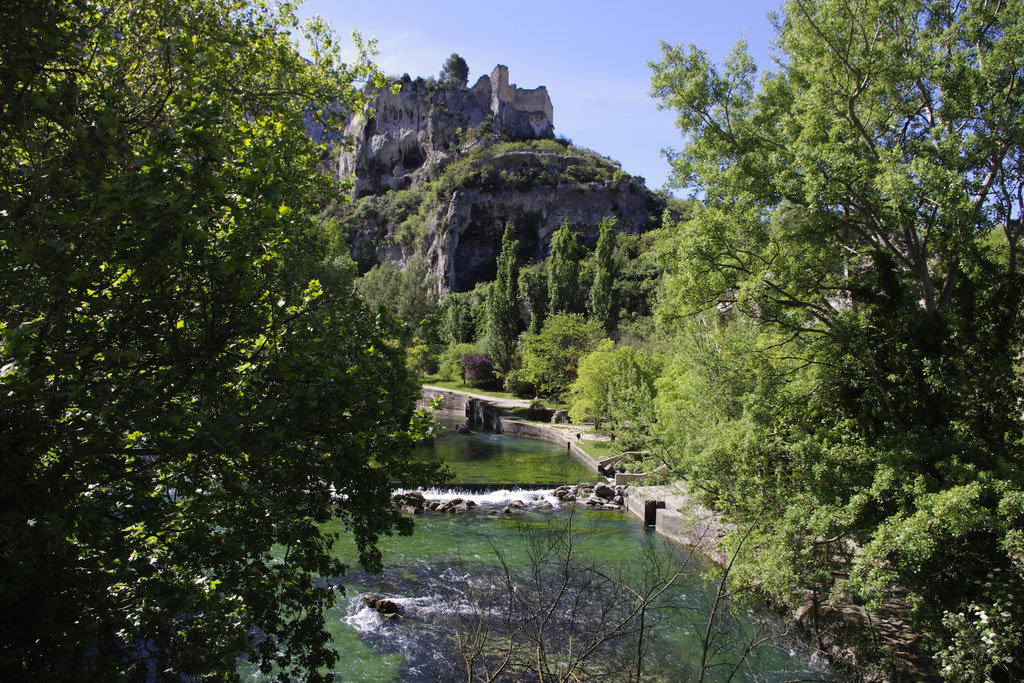 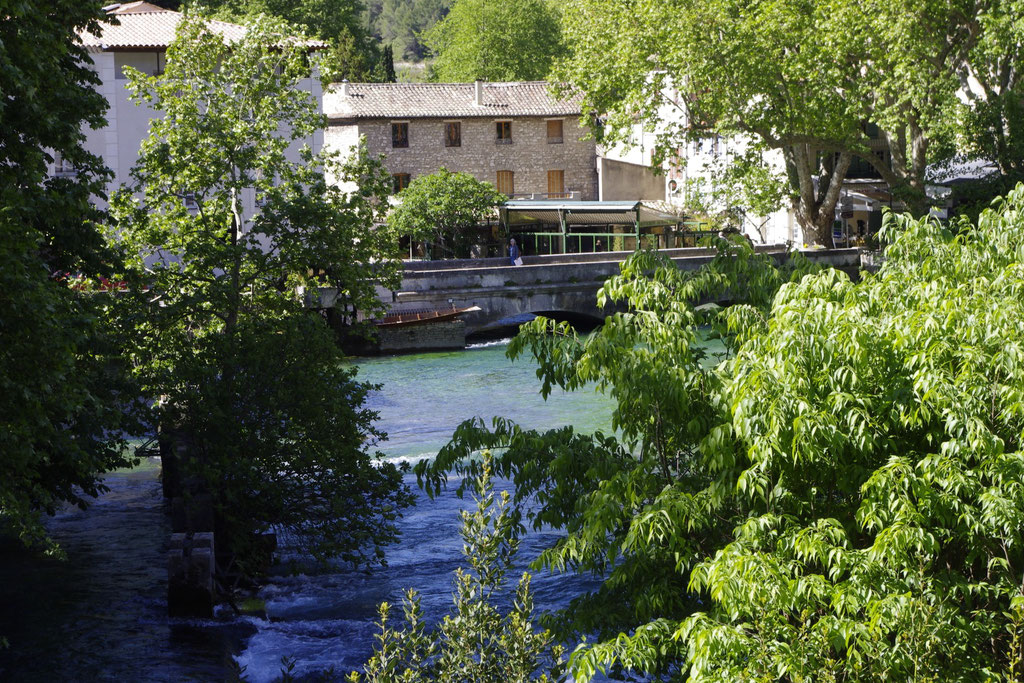 A few miles further we reach after  a bend and snuggled up in a very beautiful valley, the Cistercian abbey Notre-dame-de-Sénanque which takes its name from the river Sénancole and was founded in 1148; its construction lasted almost 100 years; Cistercians advocated an ascetic ideal, austerity and poverty. The Cistercian sites are often located in valleys:  the elected site must allow isolation in accordance with life outside the world, it has to help meet the needs of monastic life, but above all, at that time, the valleys were available, for few attractive, and therefore safe from rivalries of local lords.

3 Cistercian abbeys were built at the same time, Silvacane, south of Lourmarin and Le Thoronet in the Var district ; quarry  stones used in their construction show similar worker marks,  that prove the same builders participated in 3 edifications and marked their works in order to be paid.

Fields of lavender in bloom give the abbey in July a special attraction for photographers. The abbey is well preserved and offers an interesting visit; the access road is often congested with cars parked on the sides but one can try to go to the parking lot in front of the abbey, which is often less crowded. 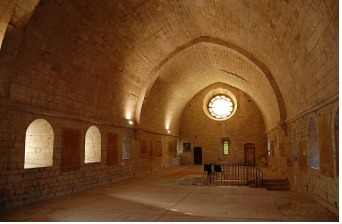 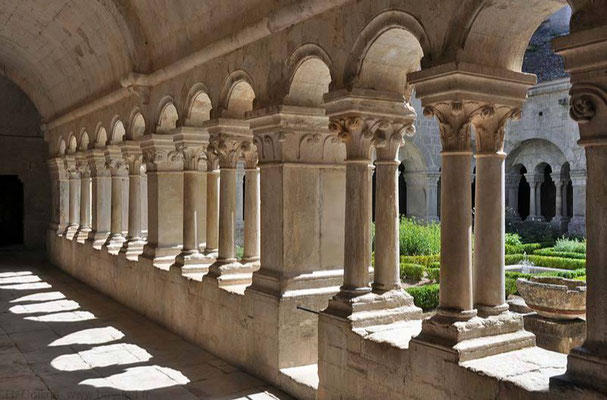 We are now close to Gordes; It was originally a village inhabited by a Celto-Ligurian tribe, the Vordenses: Vorda meant hilltop village and was pronounced "gworda"; which later became Gorda ....

The village of Gordes site is remarkable, but some visitors may be disappointed by the town because few venture beyond the site of the castle and the shopping street : you have yet to depart from the crowd, as Gordes is a place very visited, and go down the streets in order to discover the cobbled streets lined with stone gutters, vaulted passageways, stairs and houses that rely on the old fortifications.

Continuing eastward, we pass near Joucas shortly before reaching Roussillon. Joucas is a terraced village built on a hill opposite the Roussillon countryside, away from the tourist bustle suffered by other villages of the Luberon. One cross there beautiful stone houses of 17 and 18th century, quaint cobbled streets, a 18th century church decorated with trompe l'oeil.

In Joucas, you can furthermore discover here and there the works of two sculptors who have their workshops in the village.

Only 4 km further we reach Roussillon.

More than 100 million years were needed for marine sand deposits, crystallization, oxidation and successive mixtures create what is called ocher, which spreads in a range of several tens of colors. And that's at the end of the 18th century that the a Roussillon inhabitant  developed a technique to exploit those natural sands : pigments for paints or for rubber , rubber bands, tubes, lino, color for the skin of frankfurters sausages , yet more surprisingly, colorant for the old french "gitane maïs" cigarettes ! it was one of the largest deposits in the world. The advent of synthetic dyes signed the end of the industrial exploitation.

This results in open pits, which, shaped by man and natural elements have resulted in landscapes with magical colors and shapes.

In Roussillon, the ocher trail offer 2  "colored" circuits (watch white shoes ...) 30 minutes to an hour in an old quarry, among the ocher cliffs and hoodoos.

The conservatory of ocher and colors, located in an old factory, will tell you much more about the history and manufacture of ocher.

Concerning the village of Roussillon, it differs from other villages of the Luberon with its whitewashed houses with facades of ocher yellow, orange or red : navigate the streets and climb to the top of the village on the Place Pignotte where the view is spectacular.

Roussillon, the village and the ocre cliffs 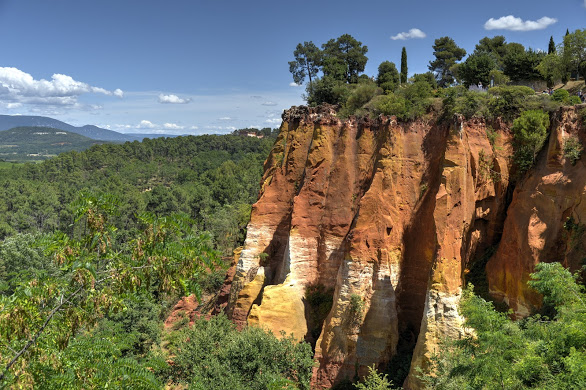 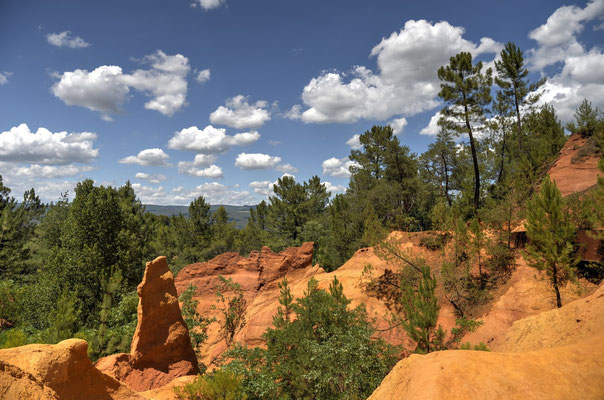 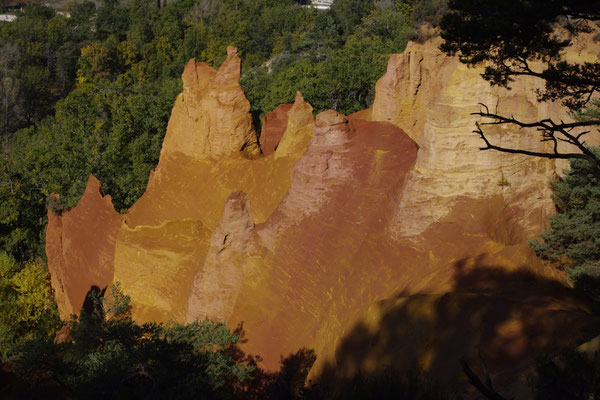 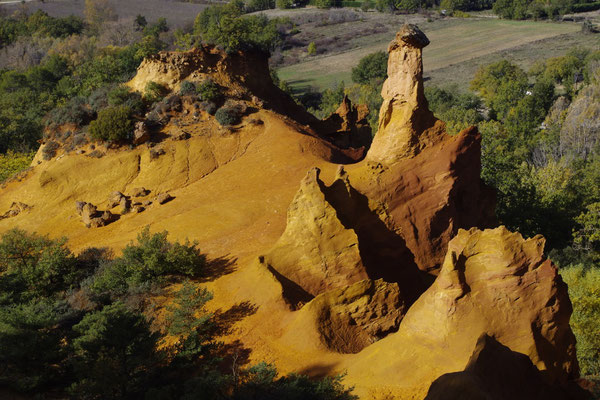 Now cross the agricultural valley between the mountains of Vaucluse in the Luberon; on our way to Bonnieux, a small detour to Goult village is interesting for people wishing to visit a small village in Provence where you can quietly stroll.

In this peaceful authentic village on the hillside, several testimonies of the 12th century remind you of the rich past of the village, Romanesque church, ancient ramparts, door harrow, medieval castle rebuilt in the 18th century (private), beautiful old houses , cafes and cozy restaurants and if you venture above the village, the site of the beautiful mill "Jerusalem" nicely restored offers a beautiful view of the valley and the Luberon mountains.

We're now a few miles from the slopes of the Luberon mountains ; before reaching Bonnieux,  the amateur has the option to stop in Bonnieux winery, which offers a choice of A.O.C Ventoux and  A.O.C Luberon.

Bonnieux is a fortified village at the crossroads of the small and large Luberon; it is a village with a very steep maze of alleys and stony stairs and very good for training, it will take numerous steps to climb and reach the top and the church of the 12th century.

It is not our favorite town, however, according to our taste, the road allowing to cross the Luberon and reach Lourmarin takes away some of its charm.

In Bonnieux, either one can return to le clos des Sorgues browsing the villages of the northern flank of the Luberon, or cross through the mountain gorges that connect to  Lourmarin and the large Luberon in the south, an area relatively protected from the mistral by the mountain barrier.

On the opposite hill from Bonnieux, both villages seem to watch each other. The village is dominated by the castle of the XI century, owned by the family Simiane then acquired by the family of Sade; the Marquis de Sade stayed there several times between 1765 and 1778. The castle belongs now to Pierre Cardin since 2001, which restored and opened to the public.

Lacoste is a beautiful medieval village, with cobbled or paved streets, calades lined with houses with mullioned windows, city walls, a belfry of the 18th century with its bell tower and its imposing castle.

Some blame Pierre Cardin to have acquired and restored many homes and leaving them unoccupied (quite strange to see lit lounges without inhabitant....), for making of Lacoste Village a Museum, especially as students from the Savannah American art school come here to soak up the Provençal way of life ; the fact remains that this is a place we like and we encourage our guests to visit it. 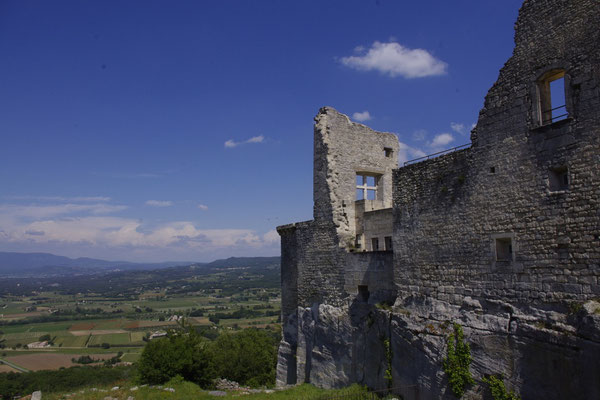 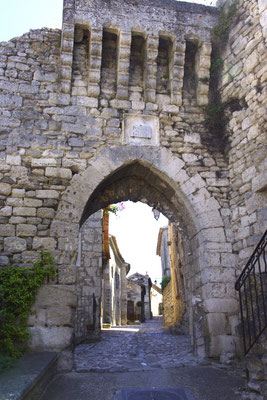 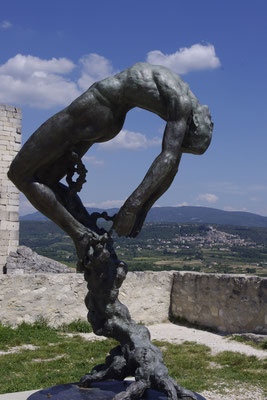 This is the English writer Peter Mayle, who in 1989 with his book a "Year in Provence"  drew attention to this village perched on a rocky outcrop; other artists, painters and writers have also be frequent guests, Albert Camus, Picasso and his muse Dora Maar, Nicolas de Stael ... Again, mansions and a medieval heritage dot the streets; the imposed structure of Ménerbe on a long rock  let us somehow regret the presence of a more concentrated village heart.

Here we are in one of our favorite villages, the closest Luberon village from le clos des Sorgues.

It was discovered here traces of Roman occupation (the name of the village comes certainly from oppidum ), Then the village is alternately under the authority of the pope then of the antipope and again of the Pope of Rome; it was at this time in 1545 that the lord of the time is one of the instigator of  the massacre of 3000 Vaudois (a movement close to Protestant ) installed in the Luberon.

Like many local cities, Oppède-le-vieux becomes part of France in the revolution. Meanwhile, the castle was gradually abandoned and looted by locals.

During the 19th century, perched and defensive positions becomes secondary and the population, discouraged by the poor crops due to bad sunlight exposition descend gradually to the plain; in the early 20th century, Oppède-le-vieux is deserted and the new village Oppède in the valley groups the former Oppède-le-vieux inhabitants..

Oppède-le-vieux now has around twenty inhabitants; we appreciate the atmosphere that emanates from its mix of ruins invaded by  weeds and lovely restored medieval houses.

Park your car in the parking lot specially fitted below the village; then stroll through beautiful terraced gardens that rise gently toward the first home and offer  unobstructed views of the Vaucluse mountains facing the Luberon.

Beyond a threshing floor of wheat, we reach the first houses and descend to the place de la croix square with its market hall, the town hall fitted above the old gate of the fortress. and a  really charming village café.

After crossing the fortified door, the houses in ruins, overgrown with wild weeds and the Renaissance facades of the 15th and 16th century form a ghostly and captivating universe; the climb to the church under restoration will allow to reach a nice view point and the castle ruins; the way back can down can by made through other just as friendly streets. 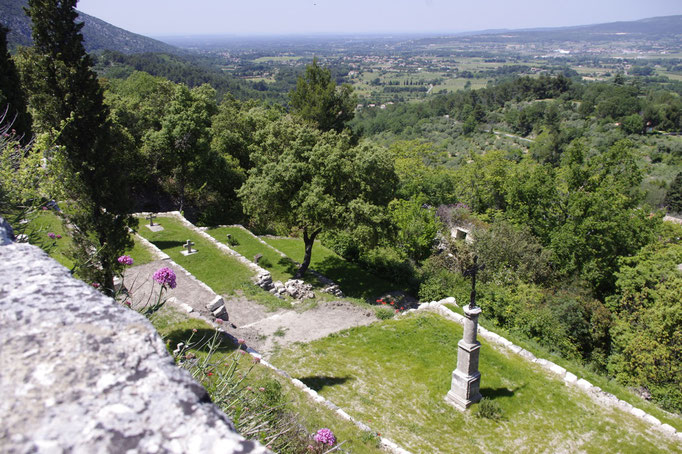 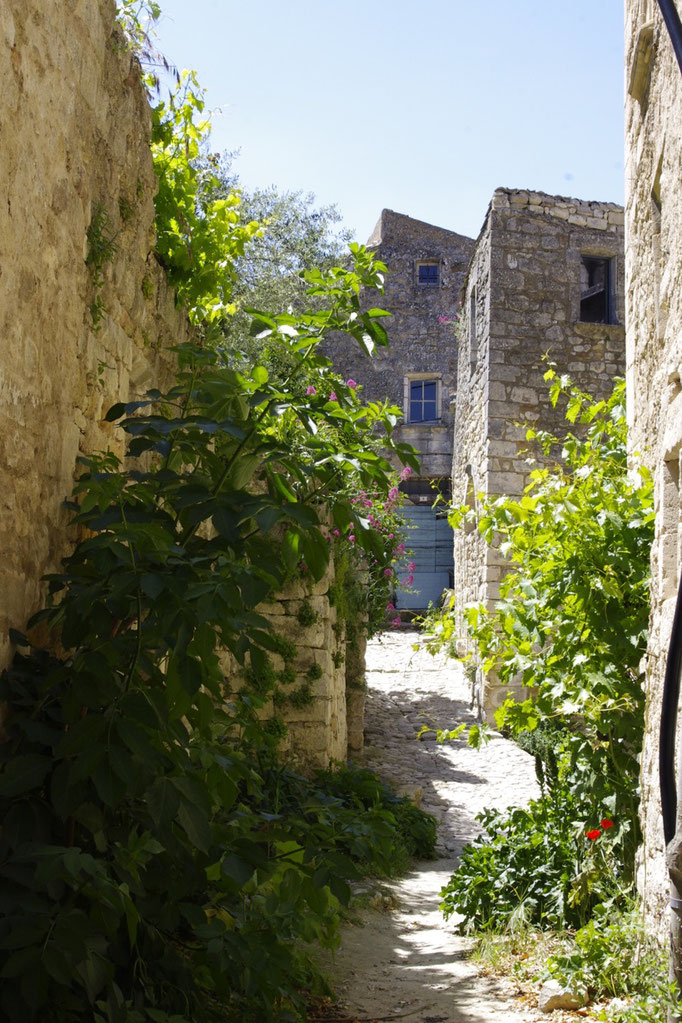 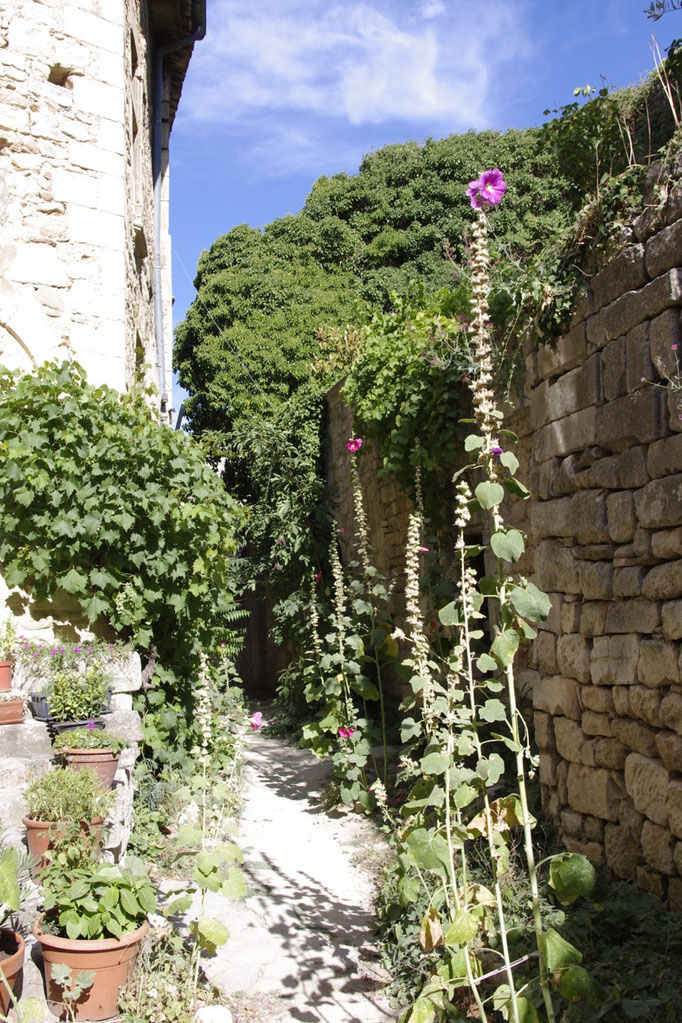 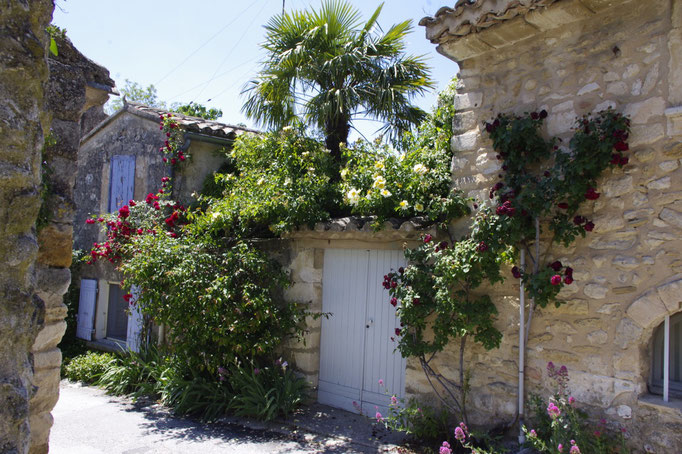 BACK TO THE TABLE OF CONTENTS