A few words of History

The site is occupied right from the Neolithic ; in antiquity, it remained capital of the Cavares, Celtic-Ligurian people, until the Roman conquest and became then a flourishing Roman colony.

The middle age is agitated, with its succession of invasions and sieges.

Different bridges will be built on the river Rhone, but the bridge built in the XII th century  will give Avignon an important economic role, it is the only crossing to the south of the city of Lyon. The Saint-Benezet bridge is then 900 meters long with 22 arches; successive floods make it a permanent construction site and only 4 arches remain today.

The XIV th centuries, facing  the insecurity in Rome, Pope Clement V decided to settle temporarily in Avignon, in particular because of the proximity of the Comtat Venaissin, church property. Finally, between 1309 and 1403, nine popes succeed, giving an unprecedented boost to the city.

Avignon becomes a leading city, both economically and artistically and adornes itself with religious buildings.

It then remains under papal trusteeship and it was only after the revolution that Avignon and the Comtat Venaissin were attached to France.

In September 1947, Jean Vilar, director of the NPT (National Popular Theatre) plays 3 plays in the courtyard of the of the Popes Palace, on the sidelines of a large contemporary art exhibition. In July of the following year, he repeated the experience. In the 60's, other places hosted shows like the cloister of the Carmelites and that of Celestine. In the 70s, shows more and more bold will be presented by artists such as Ariane Mnouchkine, Peter Brook ... Meanwhile, not officially invited troops invaded the city, giving rise to the OFF festival. Today the festival offers over 3 weeks in July, forty shows IN and more than 1,000 for the OFF, it is the world's largest theater festival, and the city is completely transformed, restaurants are open 7 days 7 late into the night, many  places are transformed into theater (schools, cinemas, chapels ...) and artists promote their shows through the streets. It's a magical moment of exchange and discovery. 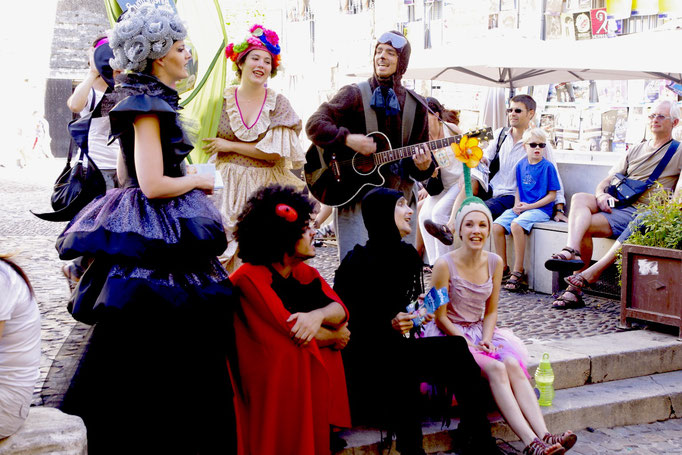 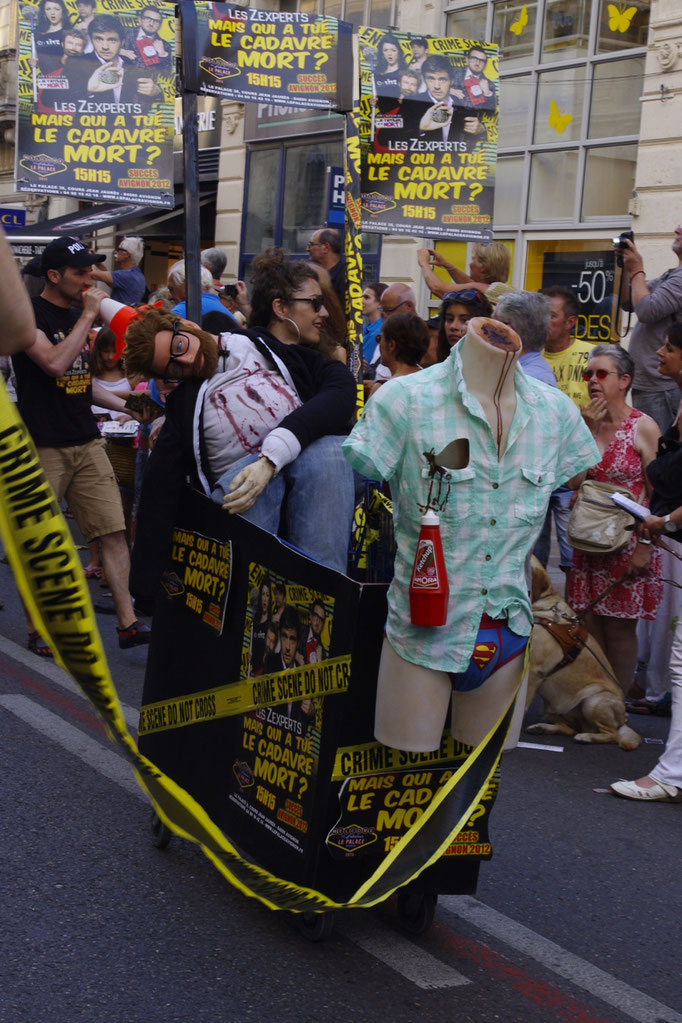 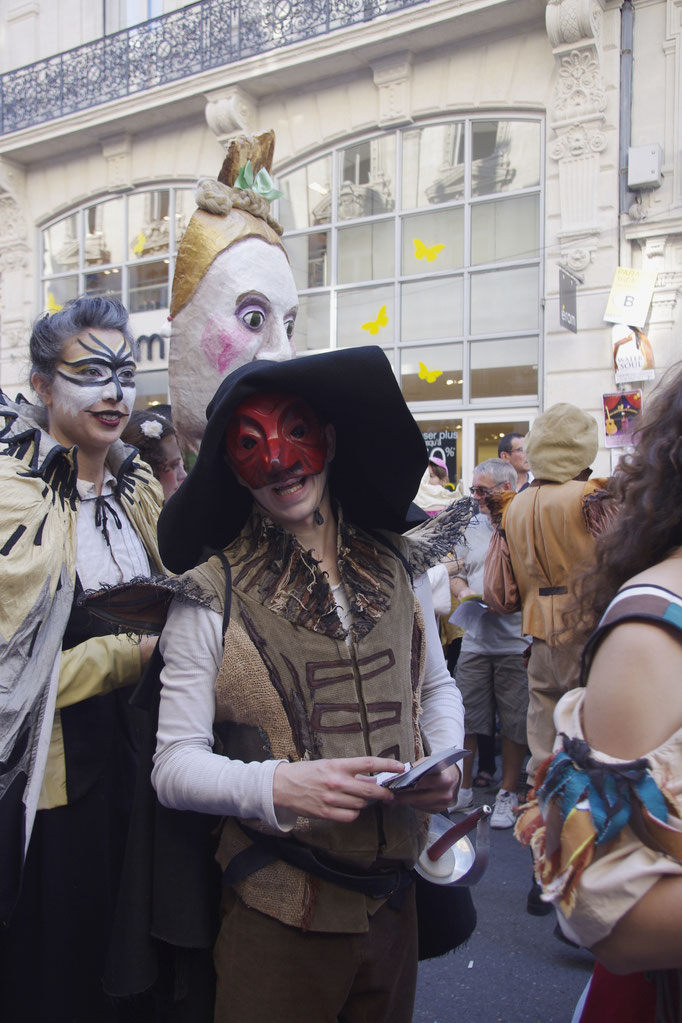 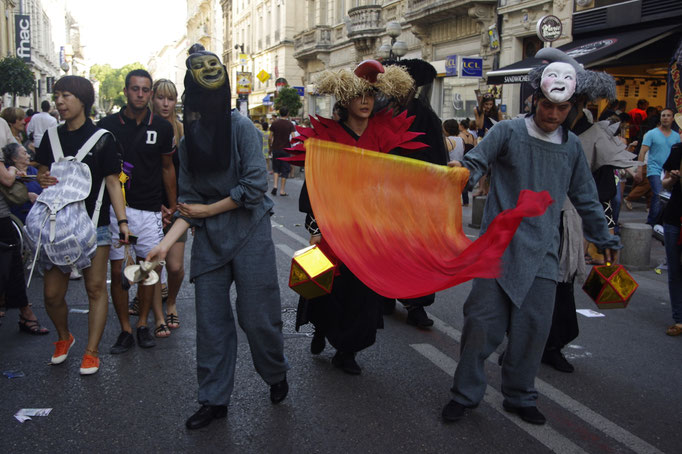 Capital of Vaucluse, Avignon has an incredibly rich history, part of which is World Heritage Site by Unesco: the Papal Palace, the world largest Gothic palace, the city  walls, the remains of the Pont Saint-Benezet, and the facade of the Mint and Notre Dame des Doms cathedral. A majestic set that greatly impresses visitors arriving on the Place du Palais des Papes !

The Pope palace : masterpiece of Gothic architecture of the fourteenth century, it is the must visit during a stay in Avignon. The tour starts in the courtyard, Mecca of theater festival. Either you join a guided tours in season, or you  have the possibility of an independent tour  with audio guides in several languages.

Do not miss the Grand Tinel Hall, the Consistoire hall, the beautiful St. Jean chapel with frescoes of Giovannetti, official  Pope Clement VI artist, the Saint-Martial chapel and the Popes sleeping room, whose decorative art of the sixteenth century looks amazingly contemporain. The climb to the top of the "la gâche" tower offers panoramic views over the rooftops and the Saint-Benezet bridge.

In August and September, an incredible sound and light show has to be discovered in the popes palast honor yard. 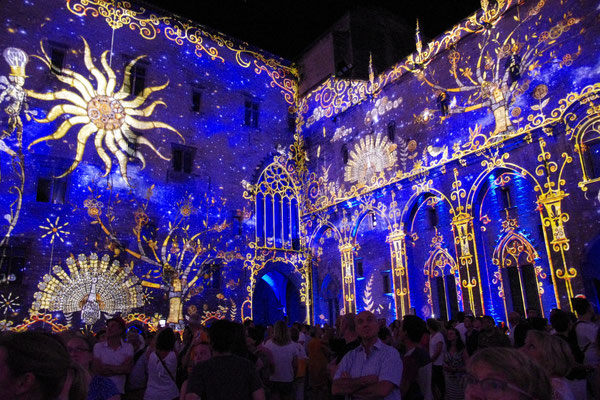 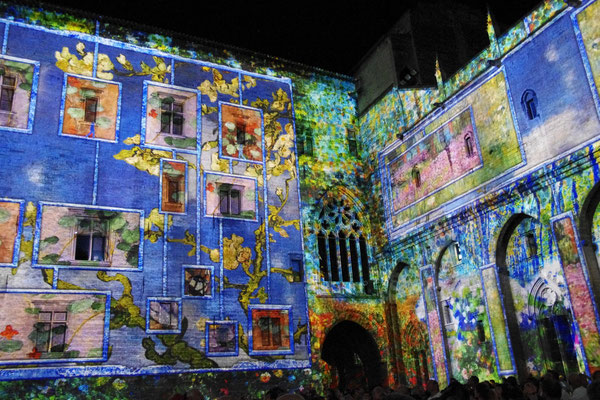 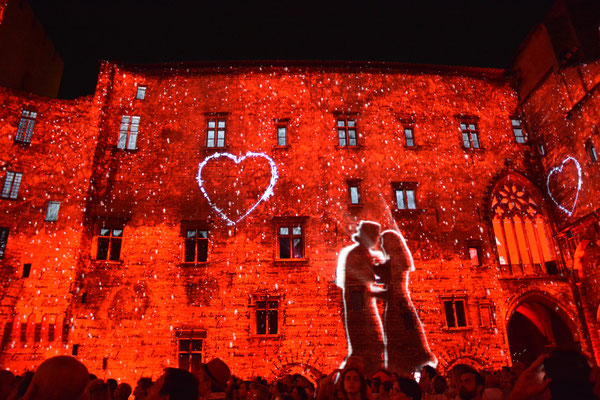 The  Doms garden and the Cathedral : Nice garden with incredible views of the Rhone, Mount Ventoux, Montmirail Dentelles, and Villeneuve-lez-Avignon just across. Doms garden is a very pleasant walk taking some height (30 meters!). Notre-Dame des Doms is the oldest religious building in Avignon. Built in the twelfth century but modified  in the nineteenth century, you have to admire there the great Romanesque nave. In the heart, a white marble seat of the twelfth century hosted the Avignon popes. A chapel houses the tomb of Jean XXII (1345)

The "Livrée Ceccano" is a magnificent testimony to the splendor of the palaces of Cardinals. Inhabited by Cardinal Ceccano from 1333 to 1350, then by Jesuits in the sixteenth century, it served as high school after 1810. Avignon municipal library is installed there since 1982. You can access the reading rooms on the 1st and 3rd floor and will notice the beautiful painted ceilings and  well-preserved murals.

The church Saint-Didier, close to the "livrée Ceccano", is a magnificent example of Gothic architecture of Provence. Built in the fourteenth century, it has few openings due to the mistral wind. Its massive tower is very harmonious and the church contains some treasures such as the relics of Saint-Benezet, Avignon bridge builder and a superb altarpiece of the fifteenth century ordered by King René.

Another interest church, the Saint Pierre Church  was built in 1358 on the remains of one of the oldest church of Avignon and has a beautiful facade of Flamboyant Gothic style with beautiful doors in solid walnut carved by Antoine Volard in 1551. The church is located on a picturesque square cobbled with Durance river stones.

The Pont Saint-Benezet : who does not know the famous song "Sur le Pont d'Avignon" and yet nobody ever danced on it but rather under the bridge, in the taverns of the Barthelasse island. This is the oldest bridge ever built between Lyon and the river mouth. The structure was built from 1177 to 1186 with 22 arches, of which only 4 still remain.On the bridge, you can discover two chapels, one dedicated to Saint-Benezet, the second to Saint-Nicolas. 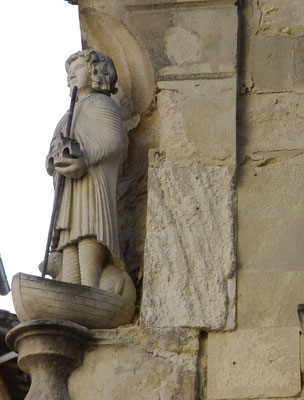 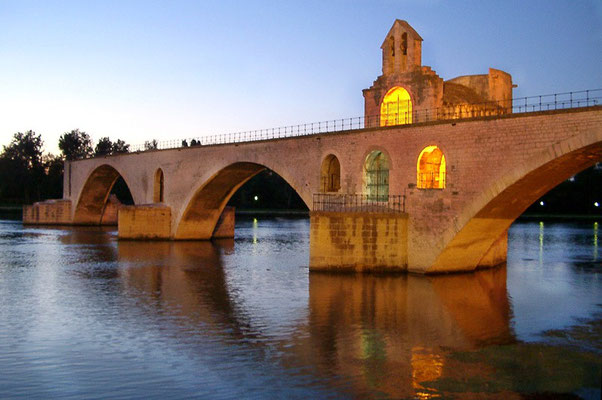 The city walls : Constructed in the fourteenth century to protect the papal city from looters but also from the many floods of the Rhone, it was Pope Innocent VI who began work in 1355. It will be completed in 1370 under the authority of Pope Urban V.  4,300 meters long, 7 doors in the middle ages allowed to enter the city. Today, there are 14 doors. The waters of the Durance and Sorgue fed the moat but it is now filled and turned into parks or parking lots.

In the nineteenth century they were almost destroyed for passing a railroad; Fortunately, thanks in part to Prosper Mérimée, curator of historical monuments, this insane project was abandoned and the city walls carefully preserved !

Discovering Avignon is also to circulate at random through the narrow streets lined with mansions, discover the nose up, sitting down at a café terrace, enjoy the sun.

Several themed tours maps are available at the Tourist Office located rue de la République. We also have some copies of the leaflet "Avignon Pass" available at le Clos des Sorgues. Feel free to ask us. It is very pleasant to stroll through the city and discover squares - there are nearly 40-, the many churches, the cardinal palaces, mansions, chapels, narrow streets.

Among our favorite places, the "rue des teinturiers", located east of the city, is full of charm. Quiet off season, its atmosphere completely changes in July and becomes one of the trendy spots of the OFF festival with many small theaters, huge plane trees under which the terraces of cafés fill the banks of the Sorgue and its paddle wheels.

Its name comes from Indian (tissue) factories settled in this area in the eighteenth century. During the festival, the restaurants are open 7 days 7 late into the night with an enjoying atmosphere 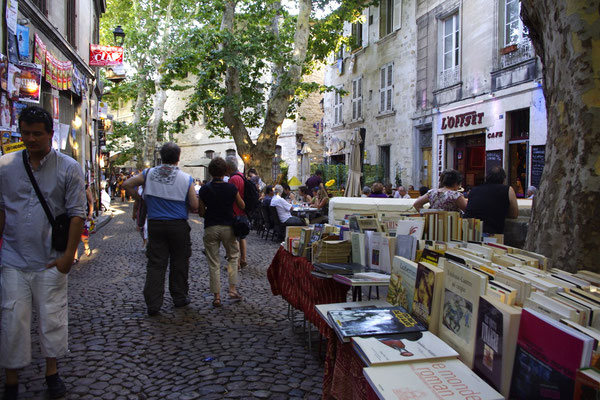 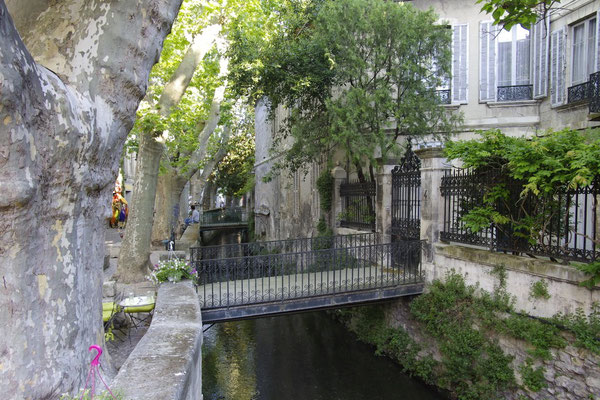 Nearby, spend some time on the "place des corps-saints" square; for the record, this square was home to a cemetery for the poor in which was buried in the fourteenth century Cardinal Pierre de Luxembourg. His family later built there a church, the church of the Celestine, to house his relics: the square took then the name place du corp saint (the holy body), attracting many pilgrims. It was not until the seventeenth century, after the transfer of the relics of Saint Benezet,that the square became "place des corps saints" referring to the 2 holy bodies. The relics were moved many times, and desecrated ; the relics are now divided between the cathedral Notre-Dame des Doms and Saint-Didier church.

The place is very nice, plane trees, cafes, restaurants and is very lively during the festival.

Discover as well the charming Place des Carmelites square, located in the district of Carreterie where many restaurants display their terraces at the first rays of sun. A flower market is held every Saturday. You can visit the cloister and the church of the former convent of the fourteenth century. This is a somewhat forgotten area from tourist circuits and yet a very pleasant square.

On the Pie square, a huge green plant wall covers the north façade of the halls since 2005. Work of Patrick Blanc, a researcher and botanist, this living green wall measures 11.50 meters high by 30 meters wide. The market is held in the Halles every morning up to 13 hours and host the best food traders in the city. Cooking classes take place there on Saturday morning at 11 o'clock. A flea market is to be found on Pie square every Tuesday and Thursday.

In the pedestrian zone, Merchants Street, you can see the Mouret Hat shop, the only hat shop in France listed as historical building. The shop has fully kept its original decor from 1860.

The Petit Palais Museum : located at the north end of the "Place du Palais des Papes", this museum is housed in the former residence of the archbishops, built in 1320. It is one of the most beautiful Italian primitives collections ( from thirteenth to the sixteenth century) outside Italy.

You can discover masterpieces such as "Madonna and Child" by Botticelli or "Holy Conversation" by carpaccio. Beautiful murals still adorn the walls and you can see beautiful ceilings. A charming restaurant / tea room located in a hidden garden between the historic walls is a romantic stop.

A tourist train can pick you up at the square of the Palais des Papes and take you for a tour of about 40 minutes including the main monuments, the Rocher des Doms, the place Crillon square,  Joseph Vernet street, the Place Saint-Didier square and St. Pierre square. Departures are every 20 minutes. 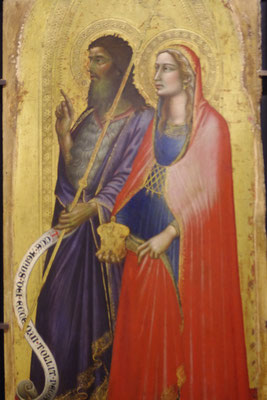 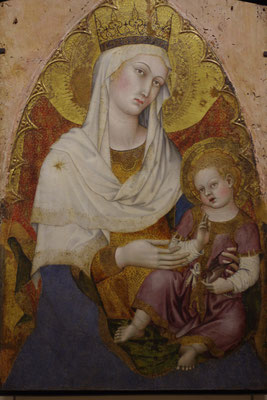 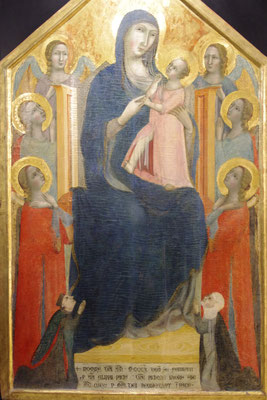 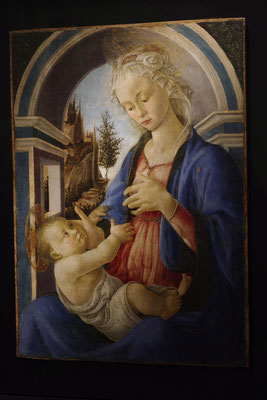 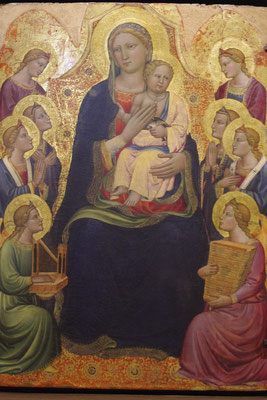 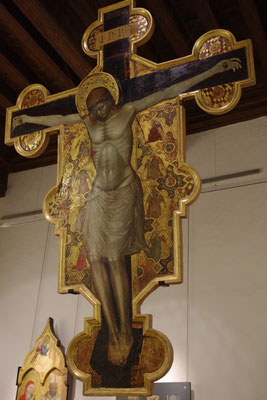 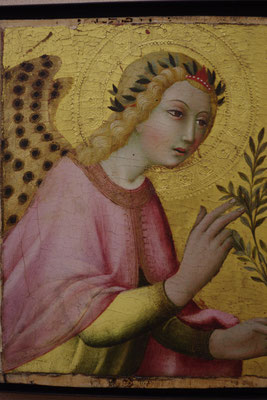 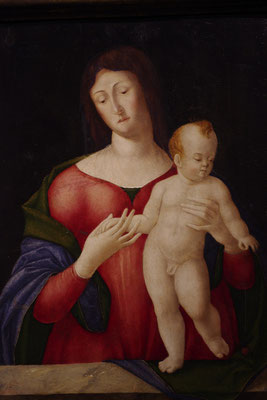 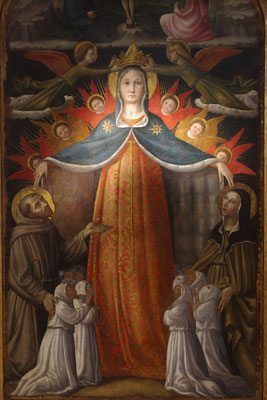 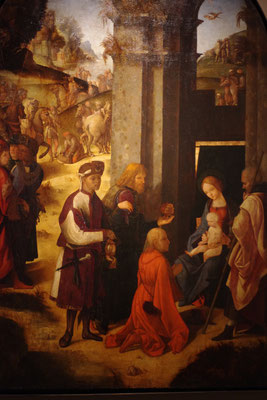 The Museum of Fine Arts and Archeology of the Calvet Foundation presents archaeological, ethnographic collections, drawings, paintings and sculptures from the 15th to the 20th century.

The works are housed in the very beautiful private mansion Villeneuve Martignan, built in the 18th century.

In the chapel of the Jesuit college, built in the 17th century, is presented the archaeological collection of the Calvet foundation.

Gallic, Greek and Roman antiquities are offered to visitors.

Located right next to the Place de l'Horloge square, this beautiful 15th century mansion is now a museum for Provençal art and history.

The house is furnished and presents different collections, costumes, paintings, traditions, as well as the history of the palace and its inhabitants.

This is the natural history museum of Avignon; Although it is modest in size with its 8 rooms, it brings together rich botanical, zoological, geological and palaeontological collections (it is the 5th herbarium in France with 450,000 samples and it includes 1 million specimens in all domains)

The museum owes its rise to Esprit Requien, naturalist famous in his time (1758-1851)

The museum occupies a beautiful mansion of the XVIIIth century, fitted out as art lover's house.

Eleven rooms follow one another for a route going from the Renaissance to the great masters of the XXth century.

Hosted in the very beautiful private mansions of Caumont and Montfaucon, the Lambert collection presents the contemporary works of the merchant and art collector Yvon Lambert.

The amateurs will appreciate the permanent exhibition and the temporary exposures of current artists.